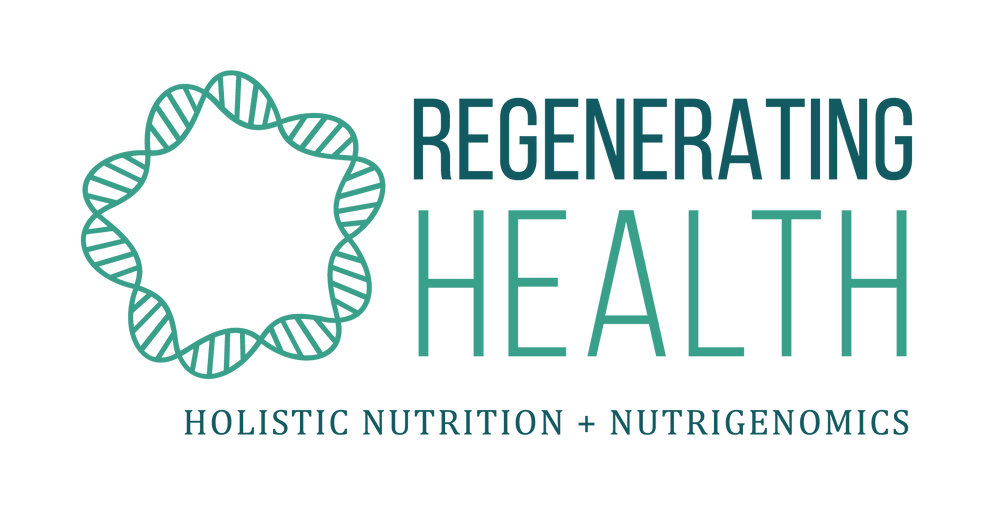 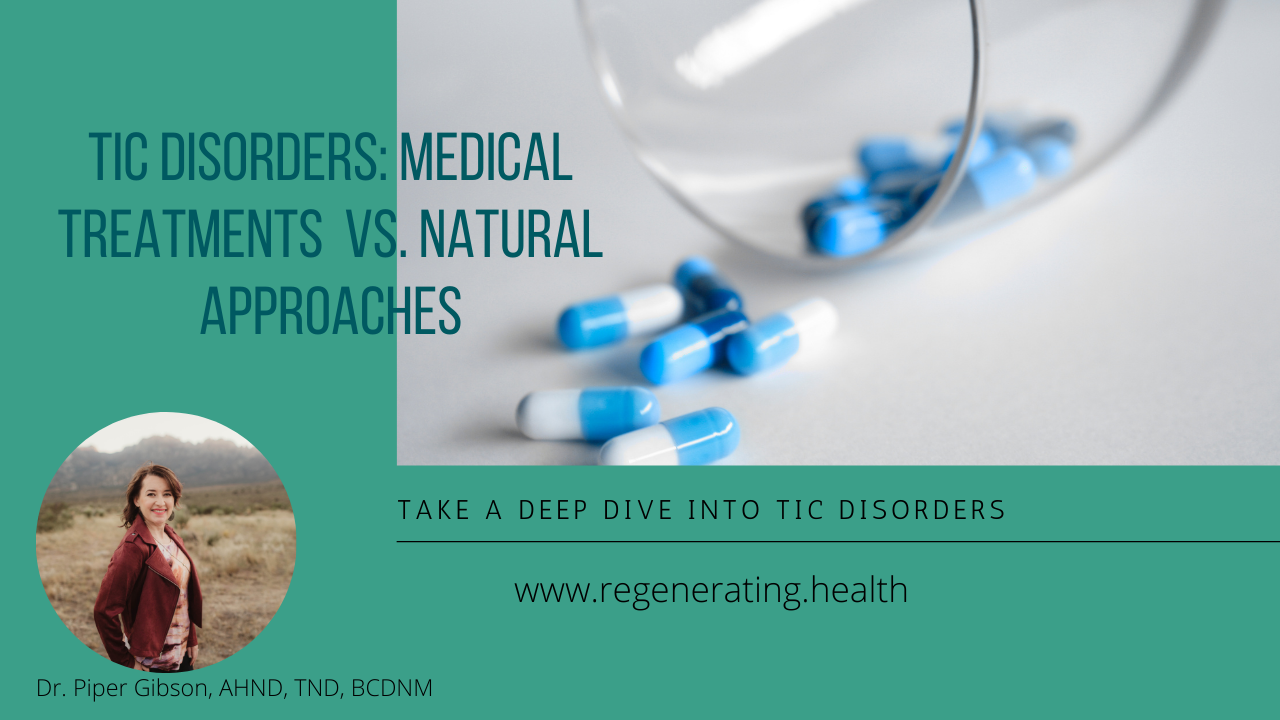 Tic disorders include both motor and vocal tics. Tics can be physical, such as blinking or arm flailing, or verbal, such as the sounds made by grunting and barking. Tics are involuntary and very difficult to control. It is estimated that 1 in every 162 children struggles with tic disorders and many practitioners feel that many more cases go undiagnosed. Tic disorders typically first appear between ages six and twelve but this number does not consider those whose tic disorder was acquired after the age of 18. Tics tend to come on suddenly in those who have previously been developing normally without any noted problems with motor skills or speech up until that point.

The exact cause of tic disorders can vary although factors such as genetics may play a role. However, in cases, such and PANS/PANDAS infectious disease and underlying infections play an even bigger role on tics. Tics are known to be caused by the overactivity of certain parts of the brain and Tic disorders often begin with premonitory urges.

When it comes to medical tic treatments it seems that what we are told by our doctors and what is typically applied in conventional medicine is a prescription medication. As parents, you may have also been told "ignore it and wait" which doesn't feel like an effective strategy. Cincinnati children’s hospital says that medications prescribed for tic disorders rarely reduce tics by more than 50 %. Plus, the two main medications used for tic disorders are for high blood pressure. In all actuality, there is no medication that is specifically for tics.

Tic medications are prescribed off-label. When meds are prescribed off label it means there was no specific study linking that particular disease/illness to the drug they are using. The FDA calls it an unapproved use for an approved drug,

Did you know that ADHD stimulant medications like Strattera, and Wellbutrin can all make tics worse?

My son has been prescribed six meds at once (none ever studied on tics) and our doctor told us “it’s ok I wouldn’t hesitate to put my kids on all of this at once.” Only to be told two weeks later by our other doctor that he would never put a child on that many meds at once.

It is estimated that at least 25% of kids in the US are on at least one prescription medication and about 10% of kids are on more than one prescription med. What nobody tells you is that once you start a medication it changes your biochemistry, altering your body's natural signals. No one ever bothers to tell you how hard it will be to come off those meds or what the side effects might be.

Why don't we hear about natural approaches from our doctors? Prescribing medications is how physicians are trained. Medical schools do not provide nutrition training or lab testing above the standard blood test. They do however spend hours learning about a pill for every ill and what prescription best fits your child's symptoms. Plus, what they do learn about tic disorders is usually from studies done over 30 years ago.

Tics have been around for centuries so it's no surprise that effective treatments have also existed for just as long. However, there has been a huge increase in tic disorders as well as PAN/PANDAS cases over the last 30 years. When you start to think about how our food sources have changed and the fact that we live in the most toxic time period in history, this increase is not surprising. You also have to take into account the accessive amount of antibiotics that are being used today.

Tics and antibiotic overuse go hand in hand. Many parents will tell you that tics increase after antibiotic use and infection. Mothers will also tell you that tics that appeared after also show ear infections (and most of the time antibiotics are prescribed for them). Tic disorders can be present before, during, and after a child has taken antibiotics. Antibiotics also kill off the good gut flora that protects us from toxins, bacteria, and viruses.

When it comes to natural solutions and approaches to tic disorders the science to support diet and lifestyle changes is out there. Studies show that caffeine, sugar, gluten, underlying infections, and environmental toxins (just to name a few) can all have an impact on tic disorders. Sugar can lead to an immediate cascade of inflammatory events throughout the whole body, directly impacting the brain. A study on gluten, celiac disease, and no gluten sensitivity all relate to an increase in tics when gluten is consumed. Chemical exposure like chlorine and fragrances can also increase tic symptoms.

Tics are multi-layered and our children have been stuck in a downward spiral and their tics are influenced by many factors and not just one. In my practice, I regularly see children who have underlying infections, microbiome imbalance, food sensitivity, neural inflammation, and genetic predisposition to chronic inflammation.

The key to natural approaches for tic disorders is to dig deeper using functional lab testing and individualized natural approaches? We start to see a decrease in tic symptoms. Why, because we are finally getting the root of what is actually behind the tic disorder in the first place. Functional lab testing has been proven more effective than prescription meds in the long term. Functional lab tests can identify what might be causing your symptoms and suggest a solution with targeted interventions such as diet changes or lifestyle modifications. In this way, you'll get to know what's happening with your child’s health and take control of it.

Functional lab testing is one great way to get an accurate look at your child's Tic disorder. For example, if tics are spurred by toxins and our child has detoxification problems, your child's body isn't properly removing environmental toxins. Toxins overload the system and cause Tics to be expressed as a coping mechanism by the body. A tic is a sign that says "HEY, SOMETHING IS WRONG HERE". By identifying which toxins are contributing to Tics in your child, you can help him or she avoid exposure to those toxins through simple lifestyle changes such as showers instead of baths, using natural grooming products with fewer chemicals, drinking filtered water, etc. This is just one example of how to can use targeting testing to help your child with their tic disorder.

Natural approaches can also include dietary supplementation. For example, Omega 3 fatty acids have been shown clinically to reduce tic symptoms for some children. However, when we use testing we know what is going on in our child's body and we can actually provide targeted supplementation instead of shooting in the dark.

There is a big disconnection between medical treatments for tic disorders and natural approaches but when you start to dig into the current science, natural approaches are winning. If you are ready to dig deeper into your child's tic disorder but you don't know where to start make sure to gran the Tic Disorder Cheat Sheet HERE. 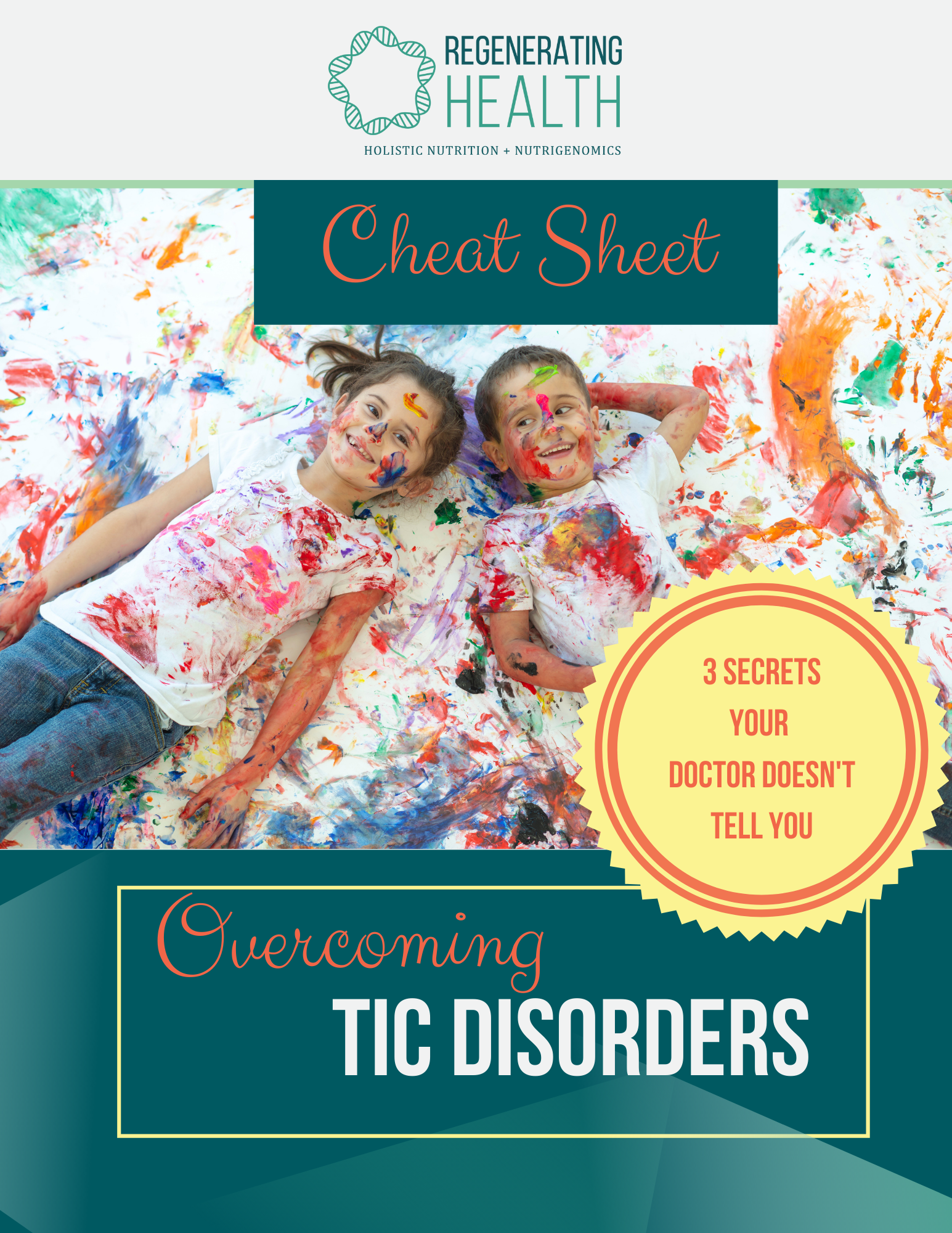